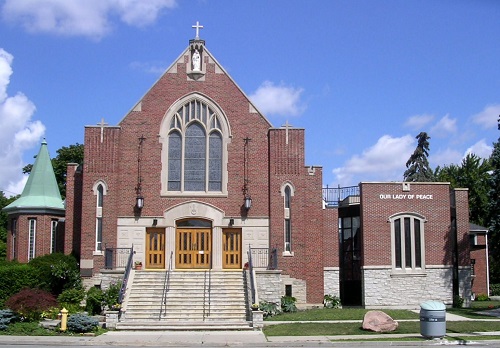 We are delighted to welcome you into the Our Lady of Peace parish community.  OLP has a rich history for close to 70 years which we hope you will become a part of.  It’s easy to register!

History of Our Lady of Peace Church

A post-war building boom was being created in the area west of Islington Avenue and Bloor Street.  Our Lady of Sorrows, in the Kingsway, had for years ministered the spiritual needs of the people in Etobicoke.  The great influx of Catholic families to the area demanded the creation of a new parish.

Under the title of St. Albert the Great, Father B. Johnson, O.P. was appointed pastor and founder of the present parish of Our Lady of Peace. He celebrated Mass in the Auditorium of St. Joseph’s High School, Islington. Unfortunately, the Dominican Fathers were not able to continue and thus the parish was given back to the Diocese and lacked a pastor. Father Percy H. Johnson who had been successful in completing the building of the new church, St. Francis, in Washago was asked by His Eminence to take charge.  The title was then changed to Our Lady of Peace and Father Johnson was appointed pastor of the new parish in October, 1951.

And So It Began

After a short stay living in the rectory of Our Lady of Sorrows, Father Johnson decided a base was needed for the new parish. He moved into an old house on Dundas Street West, present site of Michael Power High School — our first rectory. From this location, Father administered the needs of the parish and began the long and tedious job of finding a new site for our parish. Land was purchased at Bloor and Martingrove and the first sod was turned in May, 1953.

The architect of the Church was James Haffa, who also designed Our Lady of Peace School. The cornerstone of the Church was blessed and laid by Bishop B.I. Webster on November 1st, 1953. On that same occasion, he also blessed Our Lady of Peace School, which formally opened in September, 1953. At this time, in order to accommodate the ever growing population the number of Masses at St. Joseph’s High School had to be increased from two to three each Sunday.

On April 11th, 1954 (Palm Sunday) the first Mass was celebrated in the new church auditorium. On Sunday, May 9th, 1954 (Mother’s Day) His Eminence James Charles Cardinal McGuigan officiated at the dedication and blessing of the new Church of Our Lady of Peace. St. Mary’s Band formed the Guard of Honour for the Cardinal and Clergy. His Eminence was assisted by Rt. Rev. Francis V. Allen, pastor or Our Lady of Sorrows Church and Rt. Rev. John H. Ingoldsby, President of St. Augustine’s Seminary. Rev. George B. Fllahiff of St. Michael’s College Pontifical Institute of Medieval Studies was the speaker and the pastor Rev. P. H. Johnson officiated at Benediction. Father Fllahiff who later became a Cardinal, referred to the church expansion, which had taken place in this part of the Metropolitan area in the last decade. Less than 15 years ago, he said, there was not a Catholic Church between St. James on Annette Street and St. Patrick’s, Dixie.  In June 1954, the first Mass in the sanctuary of the church was celebrated.

In 1940, the Church of Our Lady of Sorrows was built and Father Gregory Kelly did outstanding work in the district. He went on to congratulate the men and women of the parish who had made this church possible.

According to records. Our Lady of Peace Church and Rectory cost $225,000, seating 650 people and registering approximately 400 families. The men and women of the parish made this church possible by pledges, bazaars, garden parties, dinners, draws and bingos. In a short nine years from the founding in 1951, the debt of Our Lady of Peace Church was completely paid off — six years after it was built. By the year 1957, there were four Masses celebrated each Sunday.

The above text and images are excerpts from the OLP 25th Anniversary Booklet.  Step back in time and enjoy this beautiful historical booklet about the first twenty-five years of Our Lady of Peace Parish.  You may find some familiar faces from back in the day!